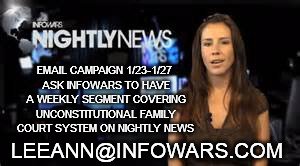 I am writing to ask you to please do a weekly segment on the subject of systemic failures, and Constitutional violations occurring in family court (and CPS).

I am writing to ask you this as a mother who has been affected by family court injustice, and because there is a great need to raise awareness. I have been involved in family court litigation for 11 years with an abusive, personality-disordered (confirmed by court psych eval) ex. I fled the relationship after an act of domestic violence left me, and my two children, homeless. Incredibly the abuser later filed for sole custody.. and through a series of illegal, unethical and Unconstitutional court actions I not only lost custody of my children but serious allegations of child abuse have also been covered up.

At the time of the court order, my ex had over a dozen documented child abuse allegations against him, with therapists filing reports to CPS. My ex was also a wanted fugitive at the time of the court order, had a history of substance abuse, and admitted in court that he “will not co-parent”. The judge (Ivy Bernhardson) issuing the court ruling stated her reasoning in part is that my fear of the abuser is not healthy for my children. I was also told that being in an address confidentiality program for victims of domestic violence is “keeping secrets” from my abuser, and is harmful to my children. This is how a loving mother, and primary caregiver, was forcibly separated from her children and alienated by court order. The abuse continues after he was awarded custody. Every time I file court motions, I lose more and more. All I want is to be a mother to my children, and to share our lives together as family. I want my children to have a normal, happy childhood free of abuse. Their childhood has been stolen from them by the family court, and with it, their mother and cultural identity has also been stolen. But I keep fighting to protect my children.

The failures of family court are creating a human rights crisis that is affecting an untold number of families across America destroying families and the futures of children. I say an “untold number” of families because the lack of transparency, and lack of accountability, in the system has served to cover up the corruption and criminal actions of judges, Guardian ad Litems and other professionals involved in what has become a money-making industry that profits from the suffering of children, and families.

In my home state of Minnesota there documentation showing problems in family court (and by extension, the Guardian ad Litem program) have existed for over 20 years… imagine how many families have been affected in all that time. It is widely known, and accepted, among Minnesota’s elected officials, that serious problems exist in family court and that children have been harmed as a result. CPS reform has begun in Minnesota. However, the problems existing in family court (and the GAL program) continue to go ignored – or otherwise not dealt with. And with it, the voices of victims go unheard.

Below I will include in more detail what some of the problems are, and some related statistics to illustrate systemic problems, and corruption occurring in family court. I will be happy to provide more information, or documentation on my own case, upon request. I appreciate you taking the time to read this letter, and hope you will consider doing a segment on family court and CPS failures.

Common complaints of from parents who have suffered injustices in family court include:

–Failure to protect the victims of domestic violence, and their children from ongoing abuse and threat of harm. Failure to recognize abuse that continues post separation, and manifests in the court setting.

–Allegations of abuse are ignored or minimized, putting children’s lives at risk. Even when children come forward to bravely reveal abuse, they are ignored or suppressed. Children who report abuse are often accused of being brainwashed and often sent to de-programming, threat therapy and re-unification therapy which are tools used to ultimately strip the protective parent of custody, and grant custody to an abusive or unfit parent.

–Children taken from fit, loving parents without just cause and given into the custody of abusive or unfit parents (who often have a criminal history, positive for substance abuse, history of abuse allegations, OFPs filed against them etc)

–Inability to afford legal help, lack of resources for legal help or legal clinics. Many parents go to court pro se, not knowing their rights and unable to effectively represent themselves. Yet these parents are held to the same standards as attorneys. Further, the court will grant an attorney to a Guardian ad Litem, paid for by the tax payers, if a complaint is raised. Parents not given the same opportunity.

–Courts stripping parents of children, property, assets and income without due process or in proceedings that violate their rights.

–Use of materials, mental health labels, submissions that does not meet evidentiary standards by court professionals. This material is used to justify the court’s own illegal and Unconstitutional actions.. or used to justify taking children from parents.

–Guardian ad Litems and family court professionals making medical opinions, diagnosis, recommending treatment without proper licensure and without any valid credentials. The recommendations made are then used to take custody of children, limit or deny parenting time, force parents into supervised visitation etc

–Denial or restriction of parenting time without justification, and without remedy to restore parenting time and/or parental rights. Many parents linger in supervised visitation for years, at great cost to them because they actually have to pay to see their children. Other parents are forcibly removed from their children’s lives never to see them again.

–Unconstitutional gag orders. This often happens when parents speak out or complain against the court. Or, alternately, against parents who speak out about abuse.

–Judge entering false or erroneous information into the findings of fact. Once this happens it is virtually impossible to overcome, and the family court case will become prejudiced against one parent.

–Lack of proper training or experience in family law.

–Lack of accountability in court system, and lack of oversight.

–Lack of complaint procedure. Judges and court professionals often hide behind a veil of immunity. Immunity does not exist when acting outside mandated duties.

Studies show that batterers have been able to convince authorities that the victim is unfit or undeserving of sole custody in approximately 70% of challenged cases.” American Judges Association “Domestic Violence Publication”

“The vast majority of these mothers (97%) reported that court personnel ignored or minimized reports of abuse. They reported feeling that they were punished for trying to protect their children and 65% said they were threatened with sanctions if the “talked publicly” about the case. In all, 45% of the mothers say they were labeled as having Parental Alienation Syndrome (PAS). The protective parents reported that the average cost of the court proceedings was over $80,000.Over a quarter of the protective parents say they were forced to file bankruptcy as a result of filing for custody of their children. Eighty-five percent of the protective parents surveyed believe that their children are still being abused; however, 63% say they stopped reporting the abuse for fear that contact with their children will be terminated. Eleven percent of the children were reported to have attempted suicide.”“Myths That Place Children At Risk During Custody Litigation”. Dallam. S. J., & Silberg, J. L. (Jan/Feb 2006). Leadership Council.

“According to a judge for the Sacramento Superior Court, more than 92,500 family law cases were filed with the family court during the four-year period under review. However, the judge stated that the family court does not capture data on the types of cases for which it is more likely to require court appointees, such as cases with contested child custody and visitation, because the family court can think of no reason, legal or otherwise, for the use of such data.” – Sacramento and Marion Superior Courts Audit, 2011 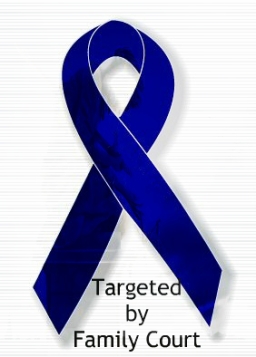 It takes "Just Us" To Fight Injustice in Family Court. I blog to raise awareness about problems existing in the family court system, and use my own story as a personal example of how the systemic failures in family court, and the Guardian ad Litem Program, affect families, in an effort to encourage needed reform. Written by a survivor of domestic violence and homelessness working to create a better life for her children, in a stable home free of violence. In her efforts to rebuild her life, she has not only encountered harassment and intimidation from her alleged abuser but faced systematic failures in family court that have empowered her alleged abuser and put her children at risk. She has spent over a decade trapped in family court until her children finally aged out of the system. Through writing and blogging, FCI is working to raise awareness about domestic violence, and the urgent need for family court reform. She is currently working on a memoir titled "'Til Prayers Are Answered".
View all posts by Emily Court →
This entry was posted in Children Stolen by the Government, Family Court Injustice and tagged #Taken, 4th Judicial District, Abuse Allegations, Abuse and Family Court, Abuse Awareness, abuse survivor, Abuser Wins Custody, Constitutional Violation Family Court, due process, DV By Proxy, family court, Family Law, Guardian Ad Litem Program, Hennepin County, Illegal Court Order, Info Wars, Injustice, Judge Ivy Bernhardson, Judge Patrick Robben, legal abuse, Losing Custody to Abuser, Minnesota, Minnesota Guardian ad Litem, Protective Parent, Stolen Children. Bookmark the permalink.