President Trump Remarks on Holocaust National Days of Remembrance: “.. it only takes one light to illuminate even the darkest space…”

A moving, powerful speech… President Trump’s speech for the national commemoration of the Holocaust.

The purpose of the National Days of Remembrance is to:

Remember the victims who perished in the Holocaust. A special ceremony that includes reading the names of the men, women, and children killed during the Holocaust is an important part of the National Days of Remembrance.  The Yad Vashem’s Shoah Victims’ Names Project has collected over 4,700,000 names of Holocaust victims.

Honor the survivors of the Holocaust. To record and preserve their stories to be passed down to future generations.

Another way to honor survivors: Help impoverished Jews who escaped death during the Holocaust live out their final years with dignity, please consider a donation to the International Fellowship of Jews and Christians

To remember the Holocaust and record it not only in history, but in the human heart and mind. To remember is to bear testimony so the lives lost will never be forgotten. To remember is educate society and draw lessons from what happened during one of the darkest eras of human history.

President Trump said in his remarks,“Your courage strengthens us.  Your voices inspire us.  And your stories remind us that we must never, ever shrink away from telling the truth about evil in our time.  Evil is always seeking to wage war against the innocent and to destroy all that is good and beautiful about our common humanity.  But evil can only thrive in darkness.  And what you have brought us today is so much more powerful than evil.  You have brought us hope — hope that love will conquer hatred, that right will defeat wrong, and that peace will rise from the ashes of war.

Each survivor here today is a beacon of light, and it only takes one light to illuminate even the darkest space.  Just like it takes only one truth to crush a thousand lies and one hero to change the course of history.  We know that in the end, good will triumph over evil, and that as long as we refuse to close our eyes or to silence our voices, we know that justice will ultimately prevail.

The week-long Days of Remembrance was first held in 1979 and then later established by Congress as the nation’s commemoration of the Holocaust. A House Joint resolution 1014 designated April 28 and 29 of 1979 as “Days of Remembrance of Victims of the Holocaust.” Senator John Danforth of Missouri, had originated the resolution, chose April 28 and 29, because it was on these dates, in 1945, that American troops liberated Dachau and several other satellite concentration camps, as well as rescuing hundreds of Jewish prisoners driven onto a death march.

Ways You Can Help Remember the Holocaust 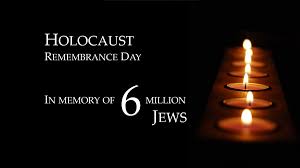 During the National Days of Remembrance ceremony at the Capitol Rotunda, a Holocaust survivor accompanied by a member of Congress will light six candles in memory of the victims.

It takes "Just Us" To Fight Injustice in Family Court. I blog to raise awareness about problems existing in the family court system, and use my own story as a personal example of how the systemic failures in family court, and the Guardian ad Litem Program, affect families, in an effort to encourage needed reform. Written by a survivor of domestic violence and homelessness working to create a better life for her children, in a stable home free of violence. In her efforts to rebuild her life, she has not only encountered harassment and intimidation from her alleged abuser but faced systematic failures in family court that have empowered her alleged abuser and put her children at risk. She has spent over a decade trapped in family court until her children finally aged out of the system. Through writing and blogging, FCI is working to raise awareness about domestic violence, and the urgent need for family court reform. She is currently working on a memoir titled "'Til Prayers Are Answered".
View all posts by Emily Court →
This entry was posted in Inspirational Quotes/Scripture, Legal News, Uncategorized and tagged #NeverForget, #RemembranceDay, Concentration Camp, Genocide, History, Holocaust, Holocaust Remembrance Day, Holocaust Survivor, International Fellowship of Jews and Christians, Liberator, Mass Murder, National Days of Remembrance, President Trump, Survivor, United States Holocaust Memorial Museum, United States Holocaust Memorial Museum National Days of Remembrance, Victims of the Holocaust, World War II. Bookmark the permalink.

1 Response to President Trump Remarks on Holocaust National Days of Remembrance: “.. it only takes one light to illuminate even the darkest space…”