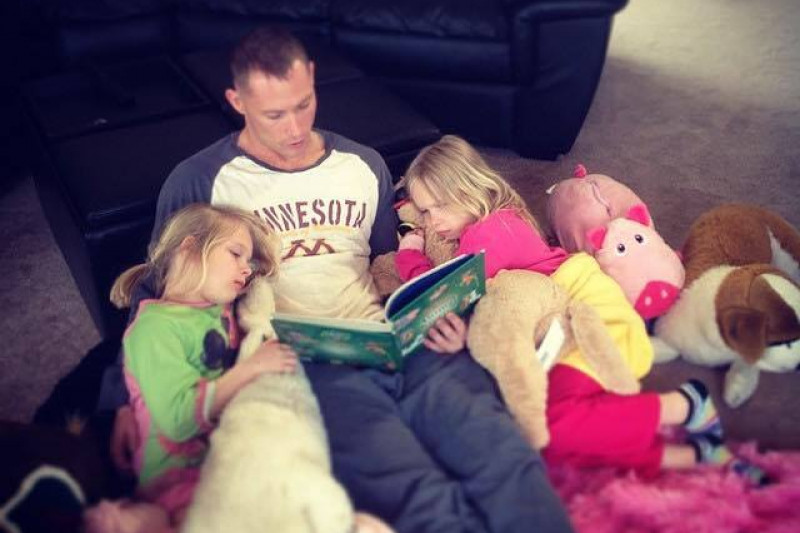 “For one Marine the most difficult conflict he would ever face would be the War at Home…” Tom Lyden of Fox 9 News investigates the story of veteran David J Carlson, who lost custody of his twin girls in a Minnesota courtroom due to allegations that as a military veteran he must have PTSD and that makes him an unfit parent. This, despite an expert report from Dr. James Tuorila, the Surgeon General for the VFW, who states,”I have no professional doubts that that Mr. Carlson is and continues to be a good father and role model for his children...” The psychologist also recommended that David’s parental rights be restored immediately.

David, a Marine corporal, served 3 combat tours in Iraq over a decade ago. Since then he earned a Masters from the University of Minnesota in security strategies and technology, became a substitute teacher, coached basketball, mentored at-risk youth and previously ran for U.S. Senate.

He has not seen his daughters in nearly a year.

David is not giving up the fight for justice, and to regain custody of his daughters.

According to a petition posted in support of David:

“In March 2016, David initiated a federal civil rights lawsuit against Ramsey County, Anoka County, and Independent School District #624, White Bear Lake, Minnesota, for damages. He also asked for an immediate injunction ordering a full return of his custodial rights, and for the immediate removal and investigation of Guardian ad Litem Ramona Olson.

David has also requested a Department of Justice (DOJ) investigation into the embattled Minnesota Guardian Ad Litem Program, which has been plagued with a variety of problems literally for decades…”

A federal judge dismissed the federal civil rights case for lack of jurisdiction.

David also filed a complaint with the Minnesota Board on Judicial Standards, but the Board claimed it had no authority and dismissed the complaint.

David hopes that through his lawsuit and story, that other parents won’t ever have to be subjected to “the terrible, immense, and unmeasurable pain and suffering he had to endure…“

Show your support, please sign the petition: President Trump Help the Carlson girls get their Daddy back!

Note: One of the most commonly reported complaints from parents involved in family court proceedings (and the Guardian ad Litem program) is that false allegations and fabricated evidence of a mental illness are used to deprive a fit, loving parent of custody and/or visitation.

I can related to David Carlson’s story because I had a similar experience in family court with false allegations, as have countless family court victims – including veterans – who have contacted this blog. These are parents not only from Minnesota but from all over the United States – mothers and fathers alike.

It takes "Just Us" To Fight Injustice in Family Court. I blog to raise awareness about problems existing in the family court system, and use my own story as a personal example of how the systemic failures in family court, and the Guardian ad Litem Program, affect families, in an effort to encourage needed reform. Written by a survivor of domestic violence and homelessness working to create a better life for her children, in a stable home free of violence. In her efforts to rebuild her life, she has not only encountered harassment and intimidation from her alleged abuser but faced systematic failures in family court that have empowered her alleged abuser and put her children at risk. She has spent over a decade trapped in family court until her children finally aged out of the system. Through writing and blogging, FCI is working to raise awareness about domestic violence, and the urgent need for family court reform. She is currently working on a memoir titled "'Til Prayers Are Answered".
View all posts by Emily Court →
This entry was posted in Children Stolen by the Government, Family Court Injustice, Legal News, Parental Alienation/DV by Proxy and tagged #DavidCarlsonUSA, Anoka County, child custody, Civil Rights Lawsuit Minnesota, Court System, David Carlson, David J Carlson, False Allegations, family court, Fox 9, Injustice, Judge Robyn A. Millenacker, Minnesota Board of Judicial Standards, Minnesota Guardian ad Litem Program, Ramona Olson, Ramona Olson Guardian ad Litem, Ramsey County, Veterans Family Court. Bookmark the permalink.

2 Responses to The War at Home Fox 9 Reports: Veteran David Carlson Fights for his Twin Girls in Minnesota Family Court