“She is my heart…” Bryce Cook, Father, Fighting to Gain Custody of Premie Daughter 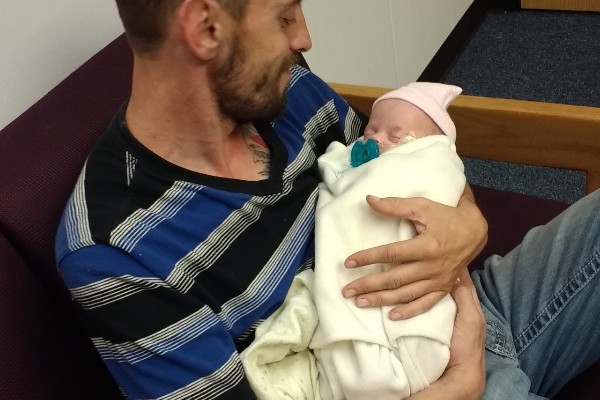 (Idaho Falls, Idaho: January 2018)  Bryce Cook is fighting to gain custody of his premie daughter, Bryelle, who was placed in foster care after he reported the child’s mother for alleged drug use. Cook says he reported the drug use because, “I want my daughter to be safe and home at least a fair chance in life…”

Bryelle is a miracle baby, born at 25 weeks weighing a little more than one pound. Cook decorated a nursery for Bryelle; the place where a baby is supposed to sleep has become a place to reflect on his pain,”I sleep in the nursery so I can look out, instead of being out looking into an empty nursery, it kills me inside. I cry, I cry just thinking about when she’s 18 and has to leave the house again.”

Cook wrote a desperate plea for help on GoFundMe:

“First if all I hate doing this I’m not a begger but I need help.

My daughter Bryelle was born 1 lb 12 oz cps was called because I was worried about her safety do to situation. Despite facts they have lied made false accusations and appointed me a criminal defense lawyer honestly I don’t know how I got involved. It wasn’t my case felt i did right thing. I was the only person to see Bryelle everyday sometimes two three times working a full time job and two part time one a payback I have two kids that mean the world to me. I have not failed any uranalysis I got on chantix for respitory issues due to the early birth.

Im finding resources to take care of her special needs likeeating even though they should’ve offered I got a nicer place and a nursery set up she is my heart and they have used everything against me even when I planned it out discredited there concerns and didn’t have a fair chance to receive the basic training I worked hard for my family and I hated doing this but thought it was worth a try.

God bless and if you wanna check out my story check out timeline God bless this girl is special and I feel hopeless. Thank you and share if you want I just want my daughter to be ok. I also have a son who misses his sister. I’m a good man and have a good heart. Anything helps Bryce Cook if u wanna check it out and share.”

Cook shared his story in support groups for parents of premature children on Facebook and has recently been featured in a local news report: Local father fighting for custody of premature daughter (Local News 8)

It takes "Just Us" To Fight Injustice in Family Court. I blog to raise awareness about problems existing in the family court system, and use my own story as a personal example of how the systemic failures in family court, and the Guardian ad Litem Program, affect families, in an effort to encourage needed reform. Written by a survivor of domestic violence and homelessness working to create a better life for her children, in a stable home free of violence. In her efforts to rebuild her life, she has not only encountered harassment and intimidation from her alleged abuser but faced systematic failures in family court that have empowered her alleged abuser and put her children at risk. She is now fighting to keep her kids safe, and bring them home. Through writing and blogging, FCI is working to raise awareness about domestic violence, and the urgent need for family court reform. She is currently working on a memoir titled "'Til Prayers Are Answered".
View all posts by Emily Court →
This entry was posted in CPS/DHS and tagged #OPExposeCPS, Bryce Cook, CPS, Custody Battles, Father, Foster Care, Help Bring Bryelle Home, Idaho Falls, Premie Babies. Bookmark the permalink.

1 Response to “She is my heart…” Bryce Cook, Father, Fighting to Gain Custody of Premie Daughter